To get a sense of the drastic measures to prevent water scarcity across the world, just look at tomato farmers.

Although separated by the Atlantic ocean and a language barrier, Mexican and Dutch tomato farmers have one problem in common. Fourteen years ago in the Mexican province of Baja California, a shortage of freshwater meant that farmers in the Maneadero Valley did not have enough to effectively irrigate their tomato fields and other crops such as cucumber.

In 2009 the state government decided to build a 20 kilometre pipeline to bring recycled (or ‘reuse’) water from the city of Ensenada to the south of the valley.

At first farmers were wary of using this water, as microbes could have made their way from the reuse water to the irrigated crops.

Eventually their concerns were settled, as researchers launched a pilot project to store the water in the valley’s saline subsurface. This allowed removed any possible pathogens from the reuse water, thereby creating safe irrigation water.

A decade later and just over 9000 kilometres from Baja California, farmers in the Dutch province of South Holland are facing the same problem with their tomato crops – how to best irrigate their crops (now in greenhouses) with reuse water. Instead of using salinity, the Nieuw-Prinsenland area is experimenting treating reuse water with filtration and advanced oxidation.

Both countries have found their own unique solution, though the problem is only growing. In 2018 a lack of rainfall led to an official water shortage in the Netherlands, and a drought last year in Mexico led to the government attempting to artificially produce rainclouds in farming areas.

This type of water stress is not isolated to tending thirsty tomatoes. Although the world is not suffering a water shortage per se, around 2.3 billion people now live in ‘water-stressed countries’, according to the United Nations. These countries do not have enough quality water to meet the demands of their people and the environment.

There are rising cases of water scarcity in countries such as Spain, the United States and South Korea. Like the Netherlands and Mexico, each country suffering water stress have developed their own way of dealing with it.

Now countries are starting to share these lessons and strategies to help others adapt and mitigate the damage caused in water-stressed areas.

For example, methods to treat reuse water for crops is being shared via WaterShare, an international network of water research organisations and utilities that want to deliver solutions for water stress for everyone. They do this by encouraging collaboration between their members to improve water resilience worldwide.

In Europe, the EU-funded Ultimate project is trying to increase both the sustainability and economic value of the water cycle throughout Europe. This includes technologies and strategies that aim to better reuse wastewater, harness its energy, and recover any useful materials from it.

‘’We are trying to tackle the water issues from many angles and many points of view,’’ says Dr Lydia Vamvakeridou-Lyroudia of the KWR Water Research Institute in the Netherlands, a partner institute of the project.

She says this goes beyond just water demand and management to how water supply and scarcity affect other sectors.

‘’In terms of policies and initiatives you cannot make decisions for the water sector alone without ignoring the other sectors which are linked to it [such as] the energy sector, the food sectors with agriculture, but also ecosystems.’’

Their results, which include ways to remotely monitor areas of water stress, are being shared via Watershare. 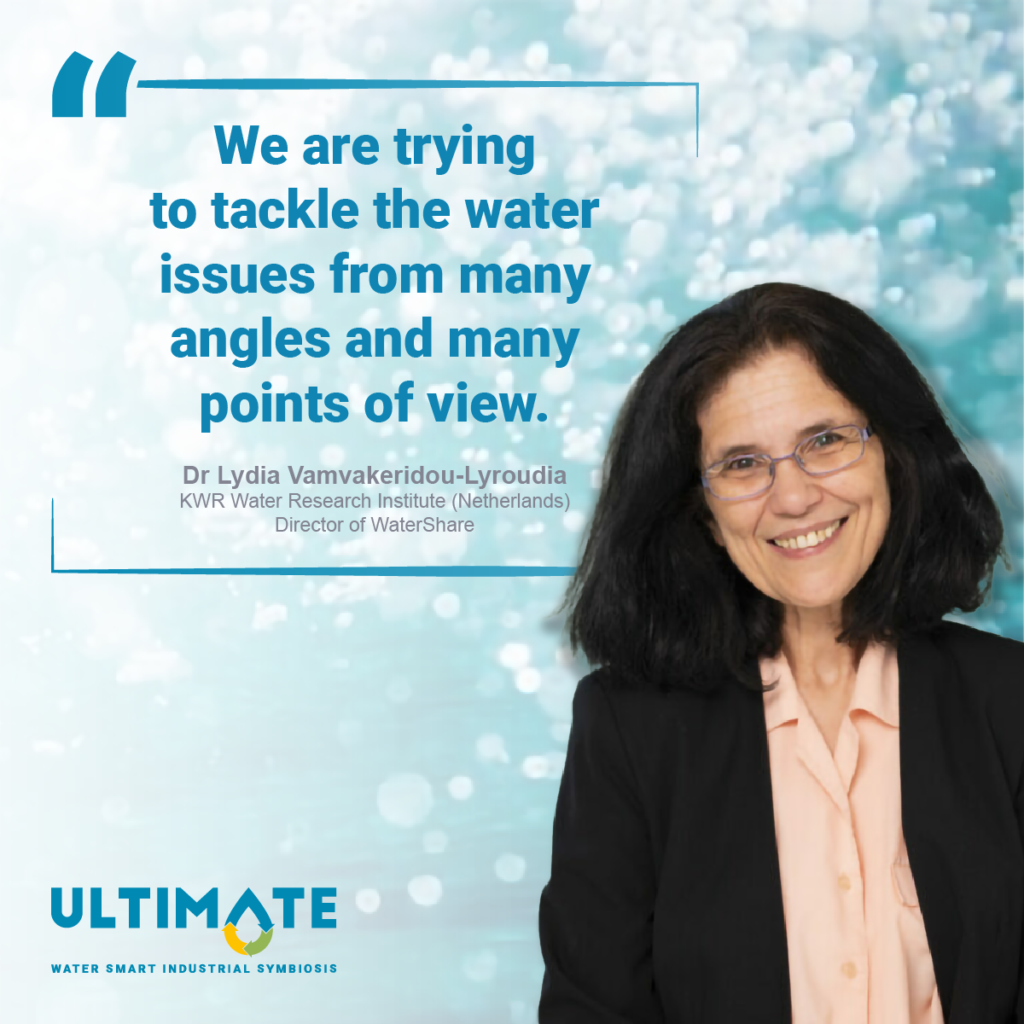 “Our focus is on knowledge exchange, chiefly (but not exclusively) focusing on local challenges,” says Vamvakeridou-Lyroudia, who acts as the Programme Director for Watershare. “We have members from all over the world which come from all faiths of water.’’

For example, during COVID lockdowns Watershare members gathered to share their experiences of sewer surveillance for detecting the virus. Global leaders in this subject like KWR were able to talk with members as far as South Africa’s Water Research Commission.

Although problems such as water scarcity can affect any region in the world, she says that the Watershare platform has began to organise regional groups to better focus on local problems which are not necessarily the same all over the world.

One upcoming hub will discuss water scarcity and the circular economy in the lower Danube, a region that has been affected by severe drought in five of the last 20 years.

“Within ULTIMATE we have organised a webinar for our Lower Danube hub in October 2021, about circular economy for the water sector, with speakers from ULTIMATE and NEXTGEN. We are planning a similar event for October 2022,” says Vamvakeridou-Lyroudia.

“We want to cover more local issues and also we want to be more interactive, by encouraging the active participation of more of our partners.”

This article was also published in the Smart Water Magazine!

Interested to make your company more #circular & #sustainable by adapting to #IndustrialSymbiosis?
ULTIMATE ...published an #OpenCall for assessing the potential of #water consuming companies to become a #WaterSmart industrial symbiosis.🏭♻️💧
Learn more
👉https://t.co/BlhTzPu9Rb

We are implemeting #Immersive / #Art & #Technology interventions in 3 of our #CaseStudies for ...#StakeholderEngagement. Last week project partners from Rosignano 🇮🇹 met in Trondheim with colleagues from @NTNUHumanities to design their #Playbook.

ULTIMATE is a 4-year Horizon2020 project under the EU Water in the Context of the Circular Economy programme. The aim is to create economic value and increase sustainability by valorising resources within the water cycle.